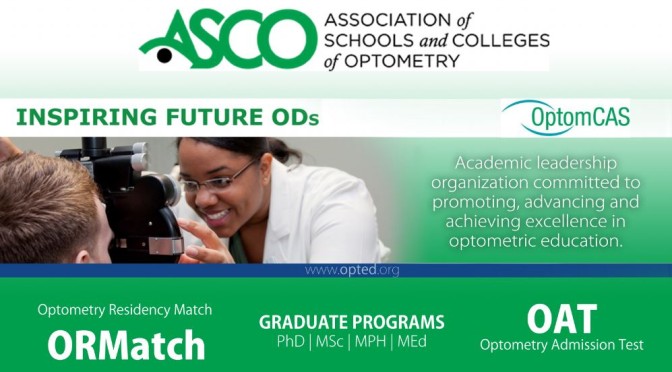 It was an exciting moment when I got the email from the AOSA President 2015-6, Hunter Chapman, saying that I was selected for the student national liaison for the Association of Schools and Colleges of Optometry (ASCO). In fact, I was the first person from RSO to be selected for a NL position. This year only 15 students were selected from the nationwide optometry student applicant pool to be liaisons of: ASCO, AAO, APHA, NBEO, COVD, OEP, CLS, and etc. Read more about NLs and their respective allied organizations here: http://www.theaosa.org/about/2015-16-allied-associations-and-national-liaisons/

I would also like to talk about the Association of Schools and Colleges of Optometry (ASCO). Prior to my position, I had no idea that this organization was in charge of the Optometry Admission Test (OAT) among other things. ASCO  is the academic leadership organization committed to promoting, advancing and achieving excellence in optometric education. ASCO represents all accredited schools and colleges of optometry in the fifty states and Puerto Rico. ASCO’s affiliate members include the Canadian schools of optometry, other foreign schools, allied organizations, and the U.S. Department of Veterans Affairs. ASCO’s activities also cover a wide range of programs including applicant development and diversity, faculty and executive development, advocacy, residency promotion, data development and communications. Since joining in on ASCO’s meeting, I have discovered how broad optometry education really is. Please read more about ASCO 0n their website: http://www.opted.org/

RSO gives a 1 week break in the summer so that students can go to Optometry’s Meeting. This year Optometry’s Meeting took place in Seattle, Washington. I knew that our school has always supported RSO students who engaged in extracurricular activities. However, our Dean, Dr. Wingert, also actively partakes in leadership roles. It was no surprise that he was the current chair of the ASCO Student Affairs Committee. The members of ASCO include the optometry school Deans and Presidents, who meet a few times a year via phone conference call, emails, and/or in person at big meetings such as Optometry’s Meeting to discuss the long list of ASCO activities listed above. Deans can also run for leadership positions within the different committees in ASCO. During this meeting each committee leader would present their updates and progress of their group. I had the honor to present to all the Deans about AOSA. I won’t lie, it was nerve racking. However after the presentation I received warm comments from Dr. Wingert (RSO Dean) and Dr. Buzzelli (Past RSO Dean, Current Dean of the University of Pikeville, College of Optometry).

I would also like to congratulate Mr. Marty Wall, MPA, CAE and ASCO outgoing-Executive Director for his many years of service. It was a pleasure to meet such a wonderful person and great leader.