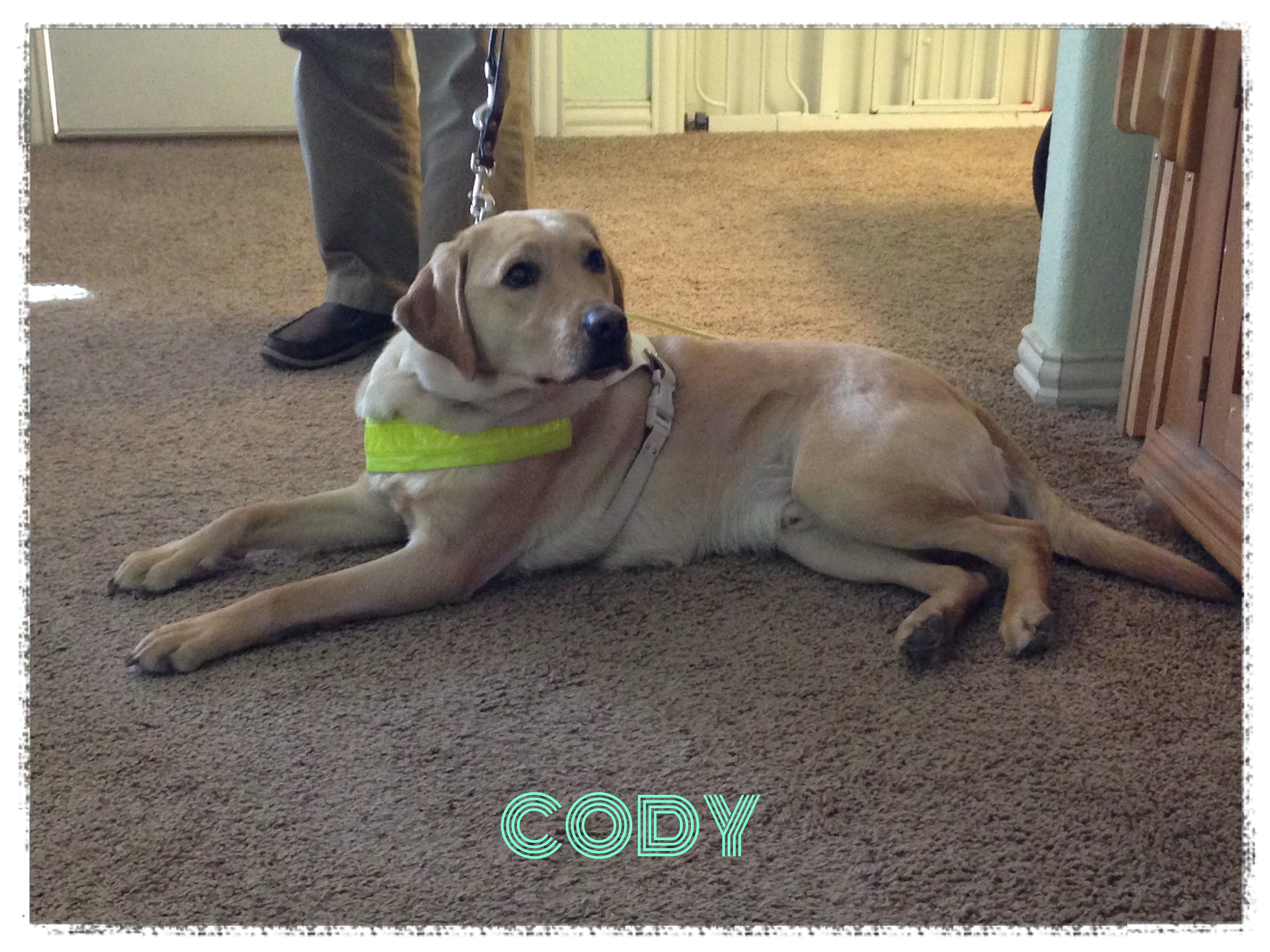 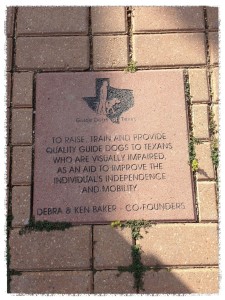 During the one-hour tour, we got to hear from three different clients about their visual impairment and success stories with guide dogs, and we also got to meet all of the clients’ guide dogs, including one named Cody.  Two staff members and one of the clients, who also served as a volunteer for the organization, gave us a tour of the grounds and facilities.  We were able to tour the kennel, which at the moment housed several guide dogs, including Duncan, and tour the residential training facility, where clients stay for a few weeks to receive training with their matched guide dogs.  We also got to watch Cosmo, another guide dog, navigate a staff member down a walkway with set obstacles to the staff member’s desired destination, in the same fashion as he would with a client in the client’s daily life. 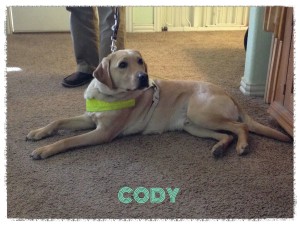 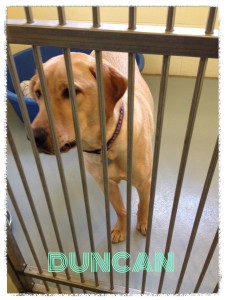 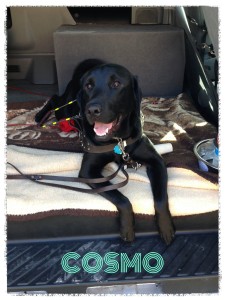 The tour allowed me to learn more about the advantages, requirements, and limitations of having a guide dog.  Advantages included increased freedom, mobility, and independence for the client.  Some requirements included being legally blind and being capable of caring for the guide dog.  A limitation was that the client had to know how to get to certain destinations (a client must know how many blocks and in which direction the restaurant is away from home) because guide dogs do not initially know that information.  I also learned about several fun volunteer opportunities available with the organization, including puppy raising, puppy sitting, and visiting the kennel to play with the guide dogs, which all sound like dream volunteer opportunities for dog lovers.

If you would like to support Guide Dogs of Texas, there are several ways to donate: 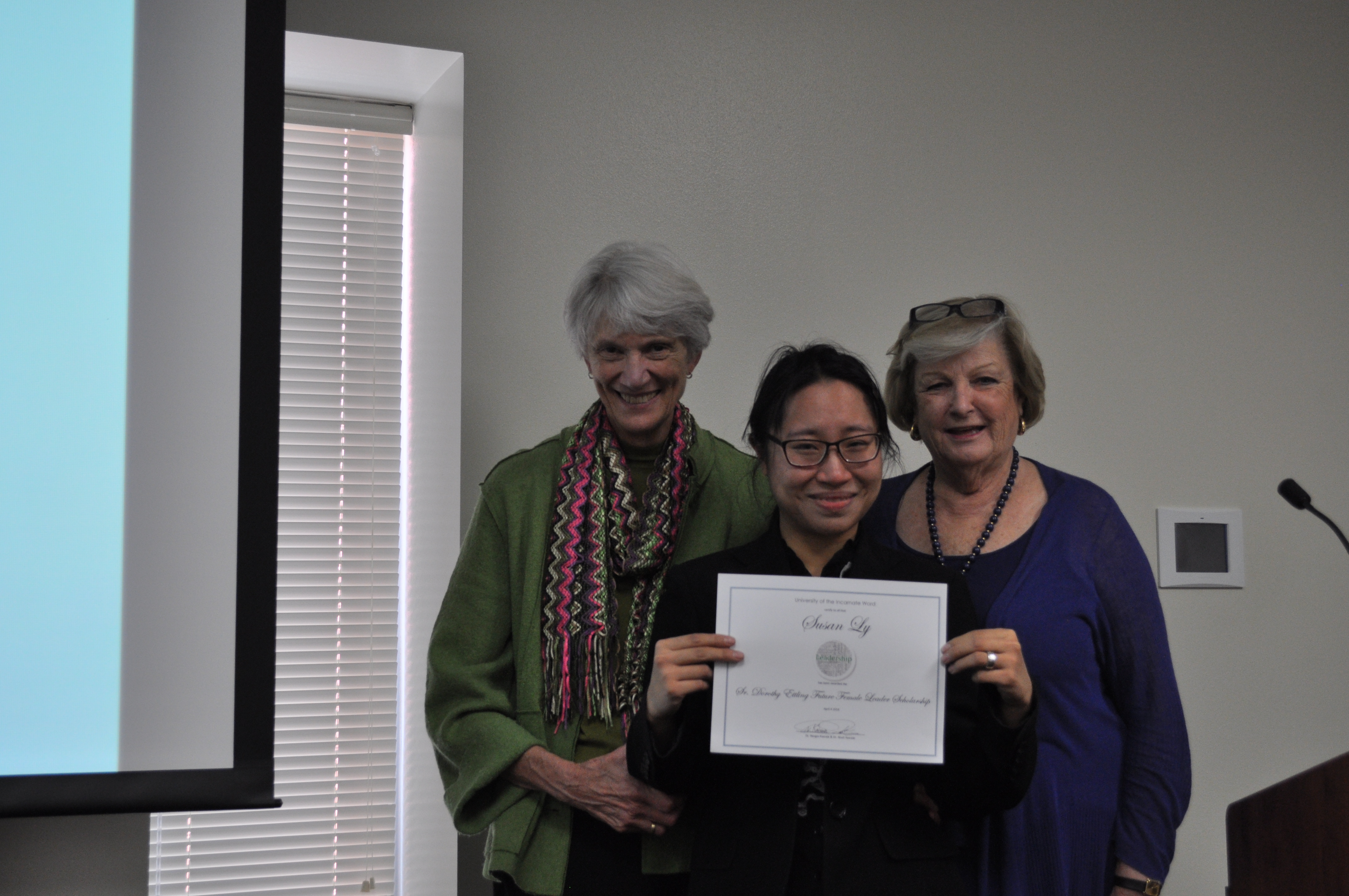 The University of the Incarnate Word was founded by the Sisters of Charity of the Incarnate Word, three young French women motivated by the love of God and their recognition of God’s presence in each person, came to San Antonio in 1869 to care for the victims of an epidemic of cholera and to establish the city’s first hospital, the Santa Rosa Infirmary. You can read more about the History of the Mission of UIW here. Their spirit of Christian service is perpetuated in the University of the Incarnate Word primarily through teaching and scholarship. Today the University continues to exemplify women’s leadership. At the Rosenberg School of Optometry, the RSO Women’s Faculty Association hosted the Leadership Forum which took place on Friday, April 4, 2014 at the UIWRSO Events room.

At the Leadership Forum, attendees were able to listen to the stories of women leaders and be inspired by their leadership. Drs. Noah and Narges Kasraie were the hosts of this event. Sr. Walter Maher, CCVI, UIW Vice President for Mission and Ministry, gave the opening prayer and Dr. Buzzelli, UIWRSO Dean, provided the warm welcome note.  The theme was Women’s History Month. Keynote speaker, Magaly Chocano, President/CEO of Sweb Development, told her story to an audience of over 100 people.  Chocano built an award-winning company from scratch. She was a former singer-turned-advertising producer and is the visionary behind Sweb’s growth in the technology community. Our second speaker was Dr. Jessica Kimmel, UIW Education Department, Muslim students at UIW, and the United National Commission on the Status of Women Delegate. It was a great pleasure to hear about her leadership in education and global involvements. Dr. Kimmel’s outstanding work has earned her UIW’s highest honor, the Moody Professorship.

There were many guests in attendance: students and faculty from across the graduate/professional programs, and UIW Chancellor, Dr. Denise Doyle, also made a trip from main campus to the Rosenberg School of Optometry. As the program was drawing near closing, Sr. Dorothy Ettling, Ph. D and Dr. Kimmel, also Chair of Scholarship Review Committee came on the podium to present the “Sr. Dorothy Ettling Future Female Leader Scholarship.”

Dr. Ettling is the co-founder of Women’s Global Connection, an international NGO whose mission is to promote the learning and leadership of women, locally and globally, particularly in least advantaged regions and countries. She currently serves as the Chairperson of the Board of Trustees for WGC and is a member of the Sisters of Charity of the Incarnate Word of San Antonio, Texas.

In honor of Dr. Ettling, the Sr. Dorothy Ettling Future Female Leader Scholarship program was created by Drs. Noah and Narges Kasraie to improve women’s access to higher education at the graduate level at the University of the Incarnate Word. The Sr. Dorothy Ettling Future Women Leader Scholarship is available to all UIW female students seeking a graduate degree on main campus or in one of the professional programs including optometry, pharmacy and physical therapy.

The awardee for the 2014 Sr. Dorothy Ettling Future Female Leader Scholarship was Andrea Guajardo, Director at CHRISTUS Santa Rosa and Ph.D. candidate in Education (Organizational Leadership) 2018 at UIW. Guajardo has been involved in the CHRISTUS Health system for over a decade and has been helping the San Antonio area as the Regional Director of Community Health.

This year the RSO Women’s Faculty Association decided to include one more awardee. I readied my camera to take a picture of the next winner, and to my complete surprise, my name was called! Tears of happiness flowed down my cheeks. The second awardee of this scholarship was Susan Ly, O.D. Optometry Candidate 2016 at UIWRSO. It was a great honor to receive this scholarship from Dr. Kimmel and Sr. Dorothy Ettling herself. I am very grateful and would also like to express my thanks to the RSO Women’s Faculty Association: 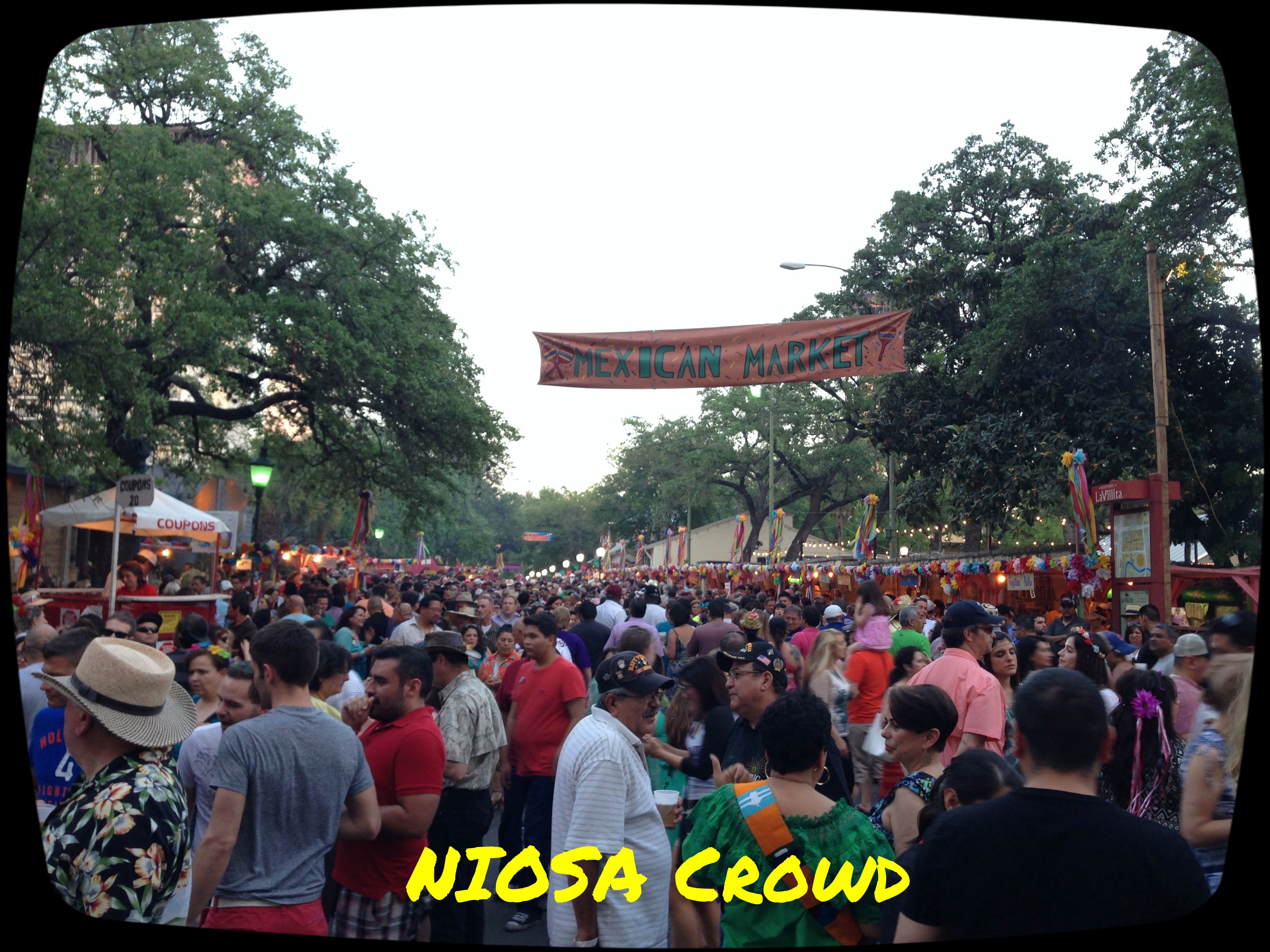 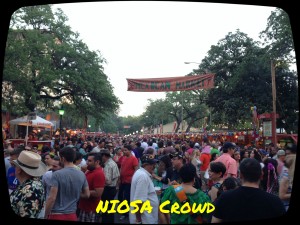 Fiesta began in 1891 as a one-parade event in San Antonio, and today, it consists of many festivals, events, and parades taking place around the city over a couple of weeks.  Fiesta is a celebration of San Antonio’s myriad of cultures and commemoration of historic heroes.  This year, Fiesta events lasted from April 10th to April 27th.

One of the most popular Fiesta events is A Night in Old San Antonio (NIOSA).  NIOSA is a four-day event that takes place in the downtown village of La Villita, which has fifteen cultural areas that represent the early immigrants that settled in the San Antonio area.  Each cultural area provides unique food, drinks, entertainment, and goods specific to the culture.

NIOSA is always a spectacular sight to see.  There are crowds of people wearing elaborate hats and headbands, and there are brightly-colored wreaths and decorations everywhere.  Cascarones (confetti-filled eggshells) are also sold throughout the event area, and people typically break the cascarones over people’s heads in good-spirited fun. 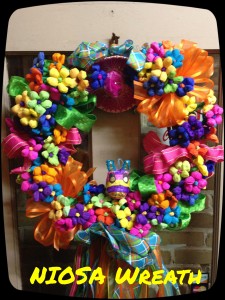 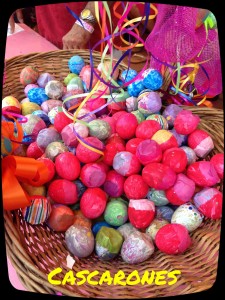 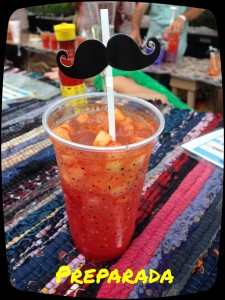 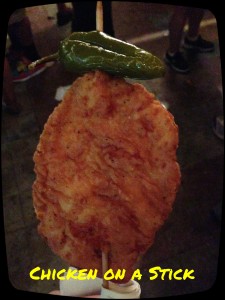 There is a variety of food and drinks to choose from, too, and some popular choices include the preparada, a fruit cocktail with chamoy, chili lime, and fresh fruits, and Mr. Chicken’s skewered fried chicken with a jalapeño.

Overall, there are over 100 Fiesta events that take place each April.  Attending the events is a great way to enjoy yourself, learn something about the history of San Antonio, and help raise money for different local organizations. 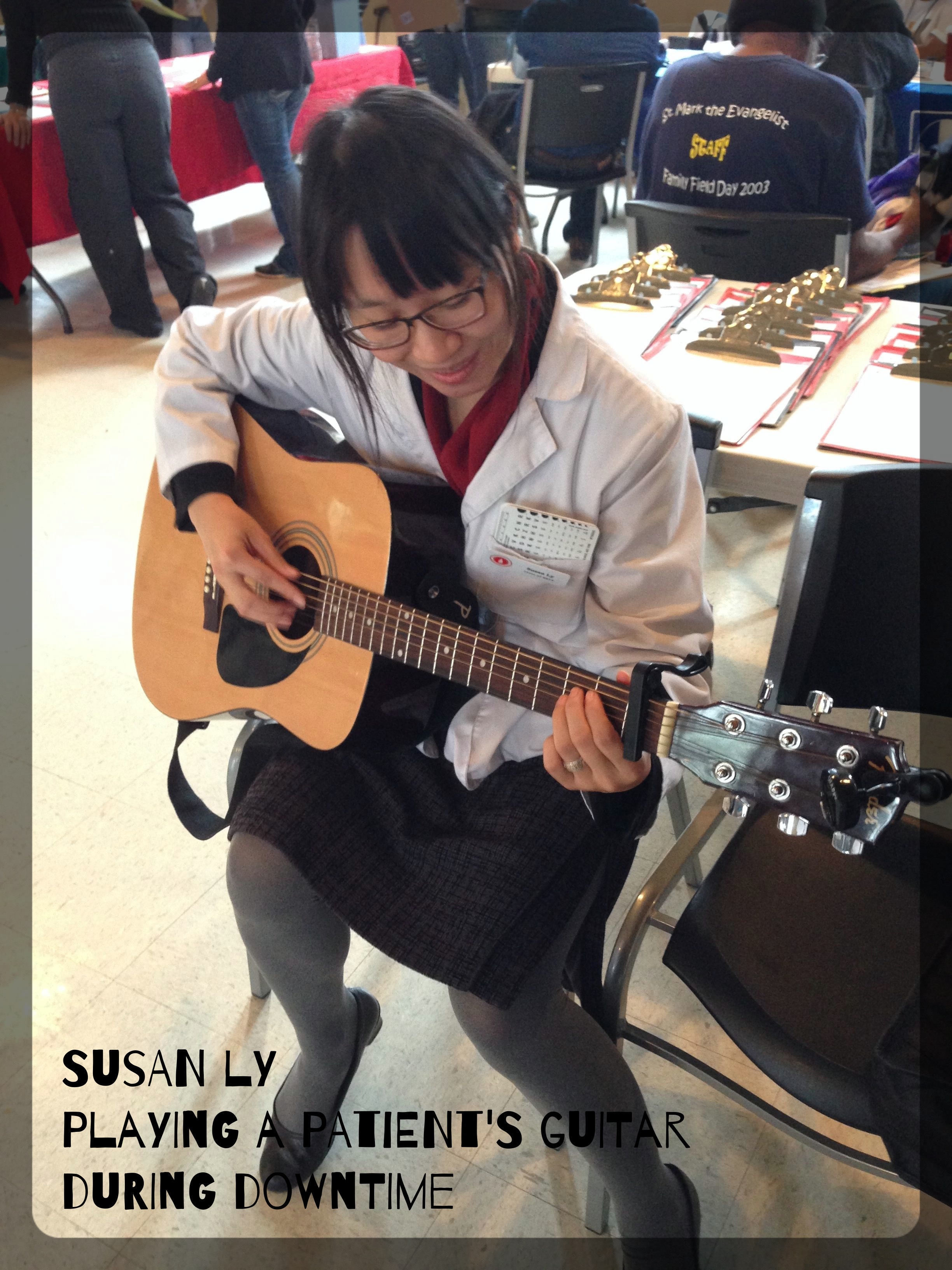 All the volunteers loaded into the school van and we put all our equipment in the back. We drove to the Holy Redeemer Catholic Church at 1819 Nevada Street, San Antonio, TX. The church was right in the middle of a residential area and most of the people in the neighborhood attending the health fair also go to church there as well. It was a festive environment with music and food in the air. Zumba was danced outside while we started setting up inside the church. The staff was extremely helpful and provided us with extra tables and space!

To optometry students, a health fair is usually time to work a vision screening, but on this occasion I had some time before the fair to walk around and talk to the other providers participating.

The dentists and dental hygienists perform free teeth cleanings for the community.  I got a goodie bag from them with toothpaste and toothbrush inside, woohoo! The nurses performed mammography screenings and demonstrated proper techniques for a self-exam. Some of the optometry students got their fingers pricked to check their cholesterol and sugar levels.

I had the pleasure of visiting with Dr. Cynthia Nguyen, Assistant Professor at the UIW Feik School of Pharmacy. The volunteers at the pharmacy table educated the attendees about the drug labels and different types of drugs media, for example, you must shake suspensions drugs (vigorously), while solutions do not require shaking. This reminded me of class and I remembered how some patients do not shake their glaucoma suspension eye drops enough; hence, they do not get the therapeutic dosage until the end of the bottle.

It is always amazing how a simple vision screening can keep so many people healthy!

It is at these fairs that I learn more and more about other health professions and only then can I further appreciate their work. I also feel more confident in whom to refer my future patients to, because I know more about their scope of practice. I also talked optometry to the other providers and educated them on the benefits of a screening versus a full eye exam.  I hope that through our communication at small health fairs, like this one, can lead to a better and integrative health system. 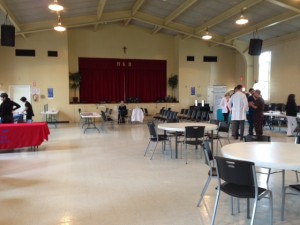 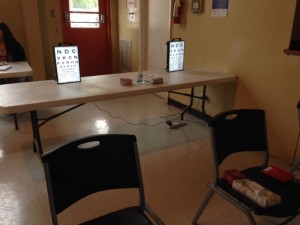 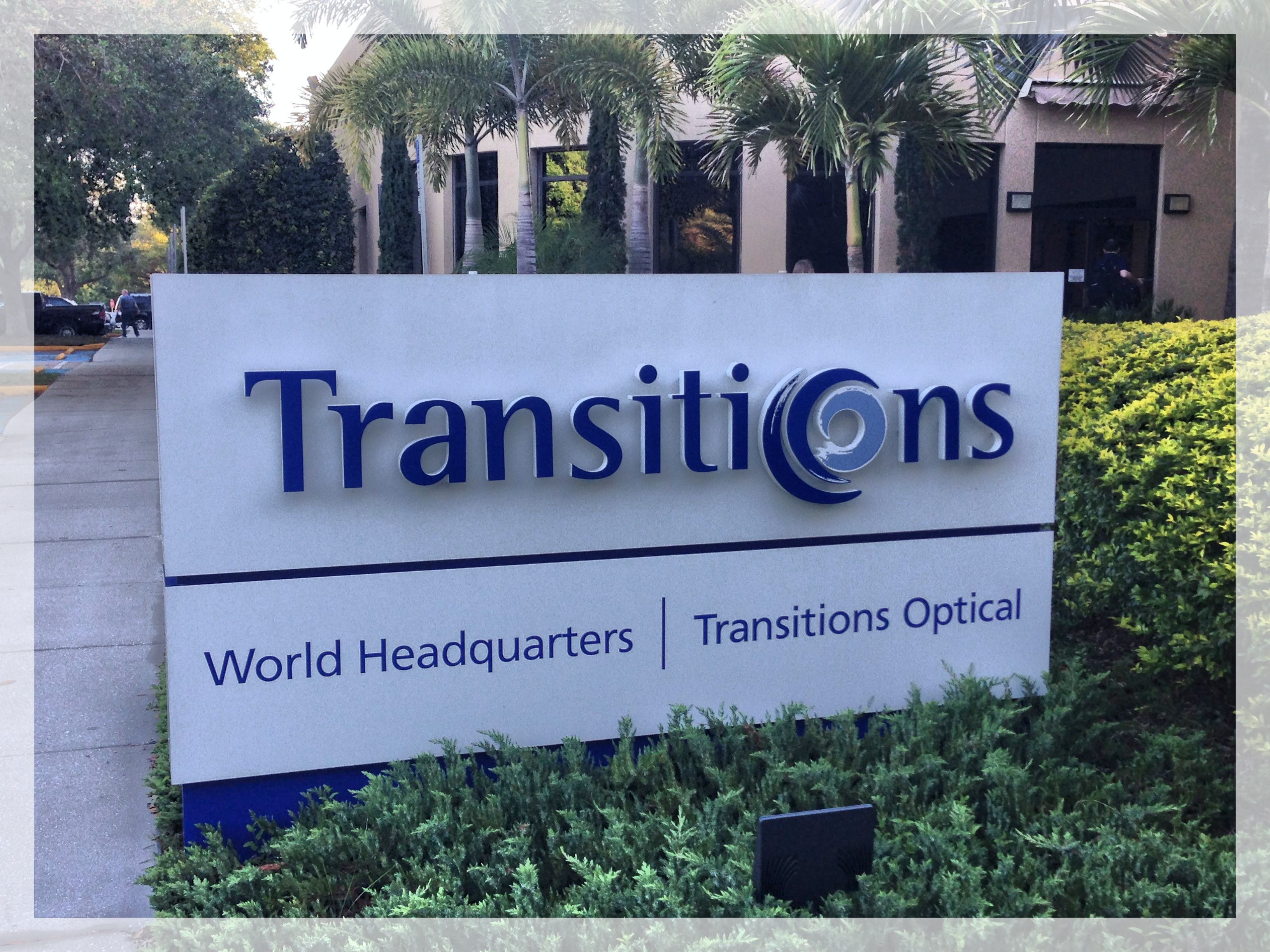 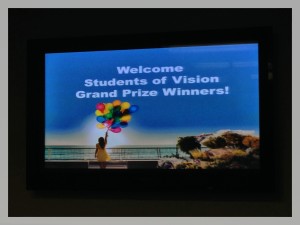 Last fall semester, I applied for the 2013 Transitions Students of Vision Scholarship by submitting a short story about volunteering optometric services to the “Share Your Impact” contest through the Transitions Students of Vision Scholarship Facebook App.  I was notified at the beginning of this spring semester that I was one of ten grand prize winners from more than forty-five applicants.  I was very excited to win the scholarship and an all-expense-paid trip (roundtrip airfare, hotel accommodations, ground transportation, and meals) to the Transitions Optical World Headquarters near Tampa, Florida.

Of the ten grand prize winners, six other optometry and opticianry students and I were able to attend the trip this past week.  We stayed at a hotel on North Redington Beach, and we started off the trip with a meet and greet dinner with some of the Transitions staff members and the students.  The next morning, we traveled to the Transitions Optical World Headquarters and had a day of leadership training and education.  The first presentation was about “Creating Remarkable Patient Experiences.”  I found the presentation very helpful because it provided great advice on how to provide the best quality patient experiences.  Next, we received a tour of the Transitions Optical facility.  After that, we participated in a StrengthsFinder exercise where we discussed our strengths.  Prior to the trip, we were instructed to complete the StrengthsFinder assessment, which provided us with a guide of our top five “themes” or strengths.  The discussion allowed us to identify our dominant strengths and learn how to maximize and develop our strengths and recognize strengths in others. 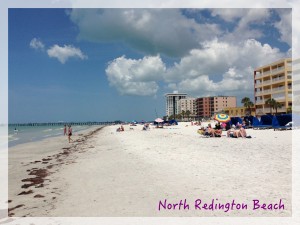 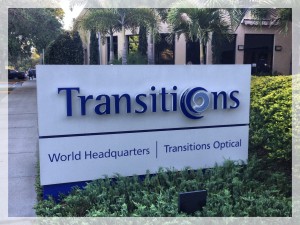 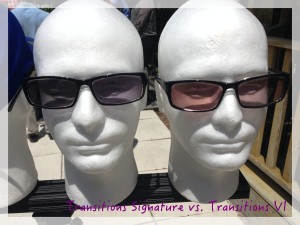 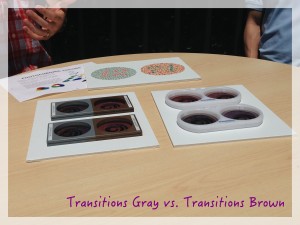 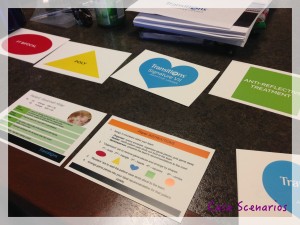 A bonus at the end of the day was getting to go to their on-site optical and selecting a free pair of frames and Transitions lenses and getting headshot photos taken by a photographer.  The trip ended with a great dinner with the Transitions staff members and the students, and we even got a little bit of free time for ourselves to do anything we wanted the next morning and afternoon before we had to depart for our flights.

This trip definitely exceeded my expectations, and it was one of my favorite trips so far during optometry school.  As always, I encourage everyone to take advantage of every scholarship opportunity available.  You only have to spend a little bit of time to complete the application requirements, but you can be rewarded with so much.